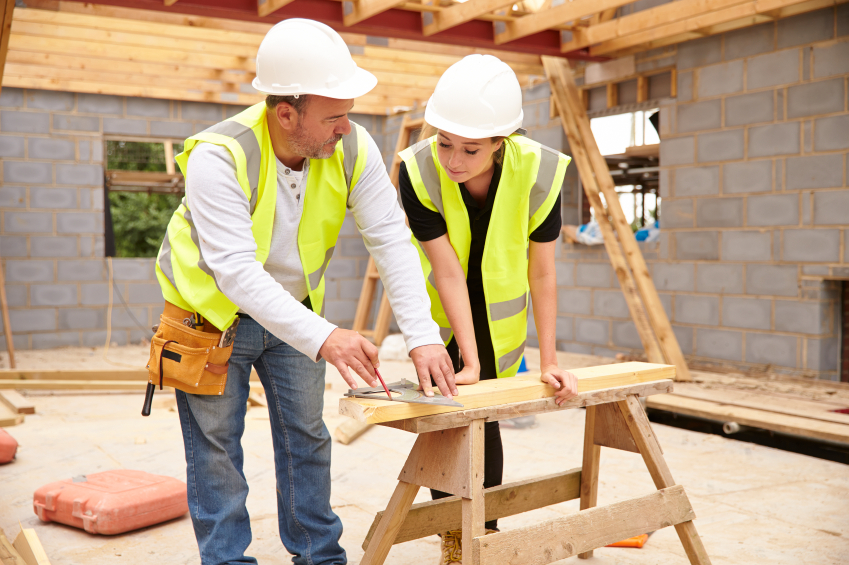 Apprenticeships, more than any other program, define On-the-Job Training (OJT). Apprenticeships typically involve several years of working directly with an experienced journeyman in a trade that involves working with your hands.

The top 10 apprenticeship occupations, by the number of job openings in that occupation, consist of the following:

Over time, a carpenter can advance to a first-line supervisor, independent contractor, or general construction supervisor.

The Bureau of Labor Statistics estimates that there are 693,050 carpenters in America. Approximately 4 out of 5 carpenter jobs (80%) are union jobs.

A high school diploma or equivalent is typically required for a career in carpentry. Vocational-technical training is useful, and some technical schools offer an associate degree in carpentry.

The Home Builders Institute offers the Pre-Apprenticeship Certificate Training (PACT) that teaches basics for carpenters interested in completing an apprenticeship. The National Association of the Remodeling Industry offers a variety of remodeling certificates.

Carpenters learn through On-the-Job Training provided by an apprenticeship. Unions and contractor associations typically sponsor apprenticeship programs. Some carpenters work under an experienced carpenter, as construction laborers or helpers, before becoming carpenters.

For each year of a typical program, apprentices must complete 144 hours of technical training and 2,000 hours of paid on-the-job training. All carpenters must pass the 10 and 30-hour safety courses required by the Occupational Safety and Health Administration (OSHA).

For a list of the local affiliated unions, and organizations go to Union Facts.

Most carpenters work in one of five main construction-related industries. These are:

The 5 industries that pay the highest carpenter salaries are as follows:

The top 5 states for carpenter employment are also 5 of the states with the largest population. They are: 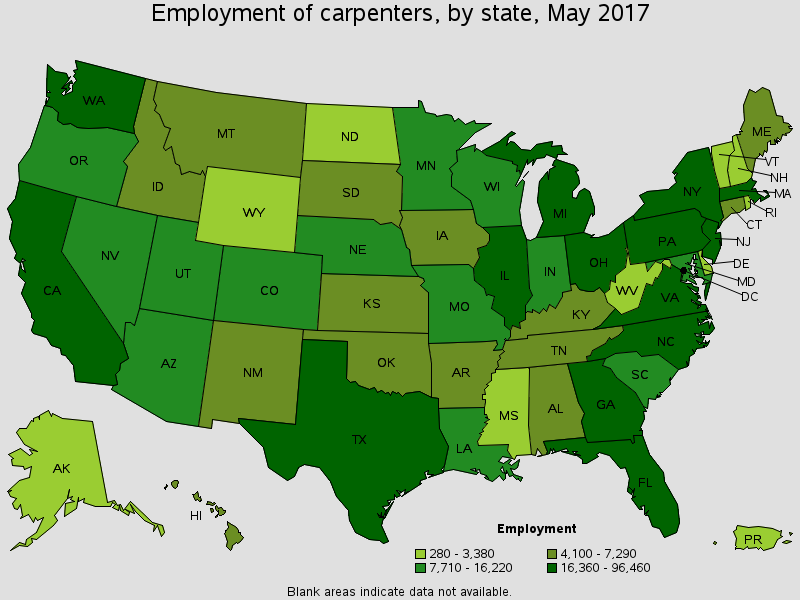 Number of Carpenters Per State

Also, these states and metropolitan areas tend to be smaller population centers where the available labor pool may not easily fill the demand.

The 5 states with the highest concentration of carpenters, relative to the rest of the country are: 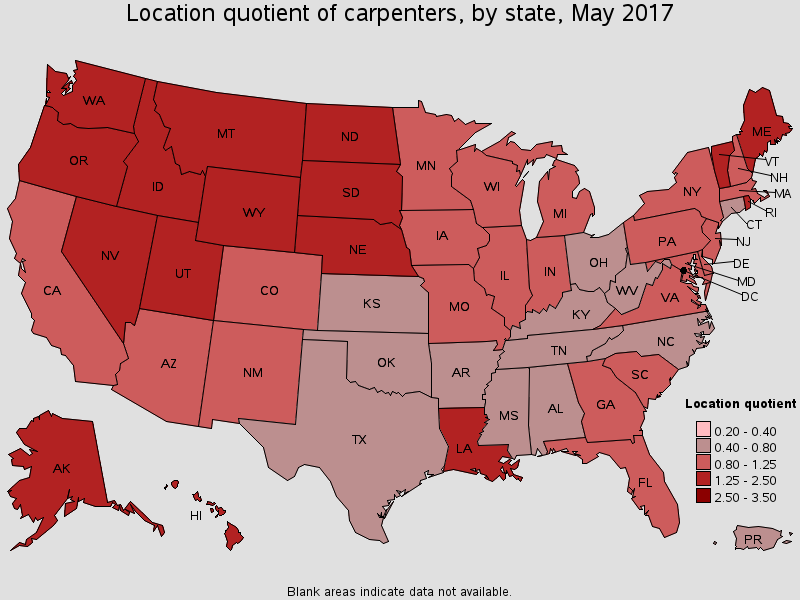 Concentration of Carpenters Per State

The 10 metropolitan areas with the highest concentration of carpenters, relative to the rest of the country are:

The following carpenter occupations are listed under the Architecture Construction occupation family and the Maintenance/Operations occupation group:

The location part of the search allows you to specify whether you want to perform a search across the entire nation, or a state or city. Like with the occupation search, you can perform a search at any level of location (nation, state, or city), but the higher levels (nation and state) include more results.

After you perform an initial search, the search results page provides you with the same occupation and location search capability to narrow or expand your search.

You can also specify whether you want to narrow your search to schools or apprenticeships. 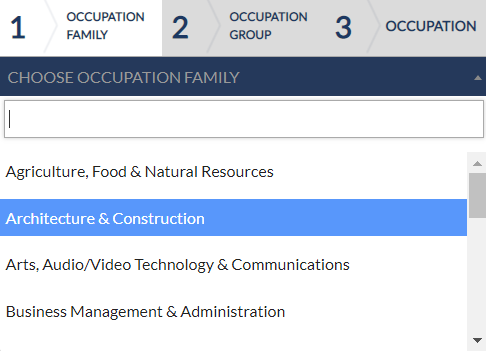 Note: The search widget only displays those occupation groups that belong to the Architecture & Construction occupation family. 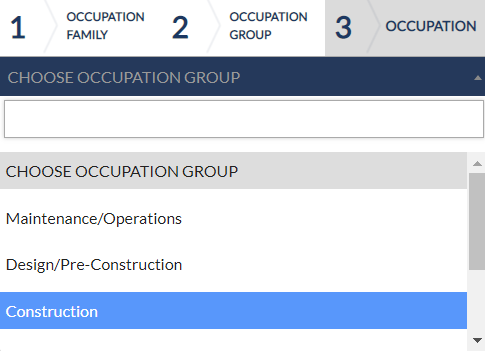 Note: The search widget only displays those occupations that belong to the Construction occupation group. 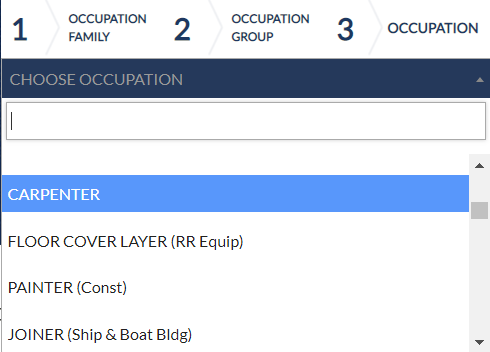 Note: You can also select any of the carpenter-related occupations shown in the bulleted list under the Carpenter Training Providers section. 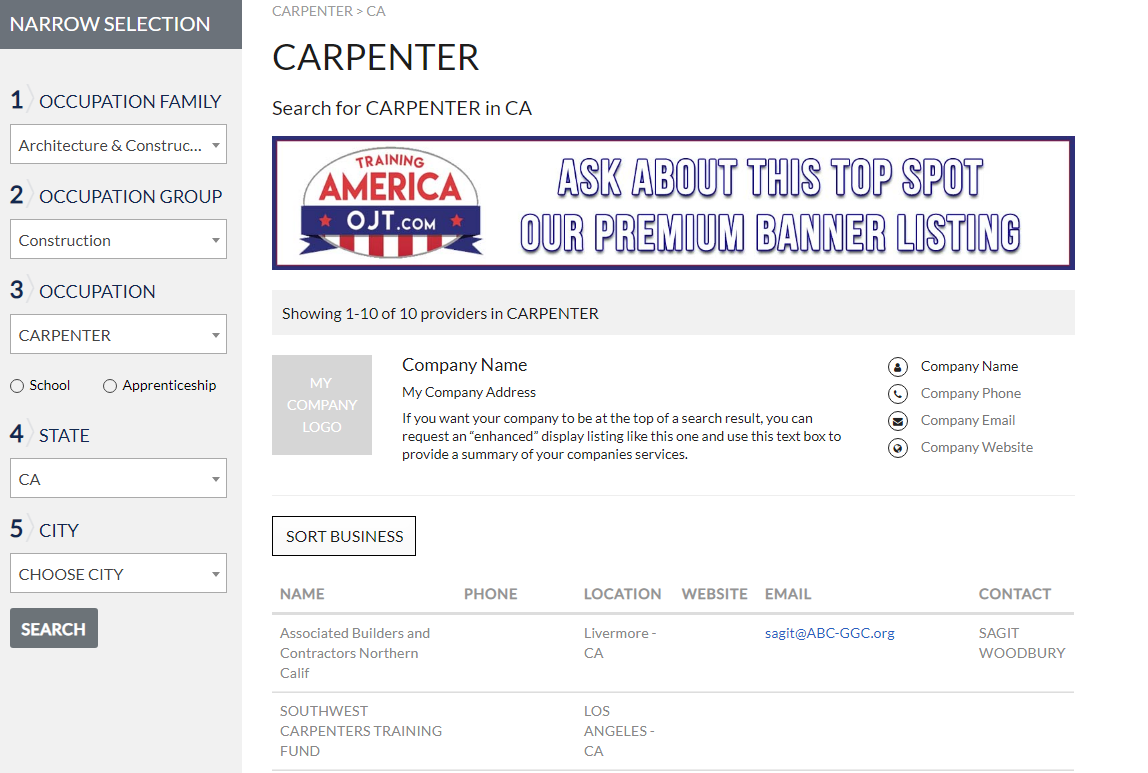